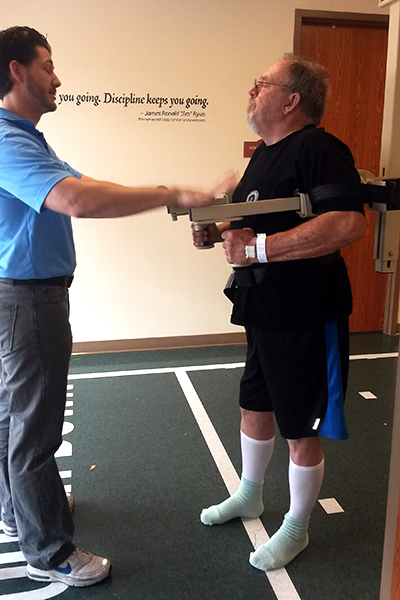 It’s not uncommon when writing about doctor and patient experiences to start out with the phrase “lots of pain” – and end with “you gave me my life back.” This is one of those stories, too. But between where it begins and where it ends, there are some informative tips for patients to consider – the kind that may help them find the right medical answers sooner, perhaps saving years of pain and frustration in the process.

Bryan Wright wished he would have had some of this knowledge beforehand that could have changed the long course of his medical journey – before he arrived at its successful conclusion with Dr. Michael Crovetti. Because sometimes, it’s just a matter of relying on your gut, and common sense.

It was 3-4 years ago that Bryan’s pain began – the kind that ran down his entire leg into his ankle. After nearly 40 years working in construction as a union electrician, it wasn’t particularly surprising. After all, physical labor takes a toll on a body after a few decades. But visits to the doctor didn’t seem to find any problems with his leg, particularly his knee, which his physician assumed to be the source of the pain.

As is often the case, though, just because an ailment is undiagnosed – it doesn’t mean it goes away. In Bryan’s case, it continued to worsen, and it wasn’t long before it seemed the pain was originating in his hip. Further tests and x-rays still indicated no knee problems, and the best suggestion he got was for injections in his knee to mitigate the pain. That had to be the source, he was told, because they considered his hip to be just peripheral to the main problem with his knee. This is where Bryan’s first bout of common sense occurred.

“I wasn’t going to have injections in my knee, because I could feel that the source of the problem was actually in my hip. But that’s not what the medical professional were telling me.” Not a big fan of pain killers either, Bryan began missing work and getting laid off of jobs. “When you can’t walk any distance, or kneel or climb ladders – you just can’t do your job. I tried, but eventually the pain would be too much, and my bosses would have to cut me loose until it improved.”

Of course, if it hurts too much to work – it also hurts the other 16 hours of the day. So the chronic pain he was suffering from took a toll on his personal life, too. His days consisted of going to work (if he could), coming home to rest, and then starting the cycle again. All of the things that people take for granted when you’re pain-free were gone. In Bryan’s case – those things were playing with grandkids, visiting family, hunting and fishing trips, and riding his Harley. Simply walking up the stairs of his two-story home was an excruciating task. Life, and the pain, were that bad.

About this time, common sense again reared its head. During the next 2 years, he saw more doctors, had more tests, and finally when getting new x-rays at a clinic, it was the x-ray technician who mentioned, “It looks like you need a hip replacement.” Finally a trip to an orthopaedic surgeon was scheduled, and after two appointments, his surgery was on the books. It was what happened during those appointments, though, that gave Bryan pause.

“My whole impression formed of this clinic wasn’t good,” continued Bryan. “The staff was unfriendly, the doctor was uncommunicative and answered my questions in terms that I didn’t understand. In fact, he spent far more time explaining all the liability issues than he did telling me what he was planning to do to my body. And what he did tell me about the surgery didn’t sound right. The length of the incision, how long the surgery would take, how he would cut all the muscles and tendons to access my hip. I was uneasy, to say the least. But what finally convinced me to take back control was when he told me he absolutely wouldn’t do the surgery until I stopped smoking for 90 days. The thought of the pain continuing for another 3 months was more than I could deal with.”

Serendipity stepped in, and he happened to speak with a friend whose daughter had a knee replacement done -who strongly urged Bryan to call her doctor – which he did, the very next day. His first visit with Dr. Crovetti was on a Tuesday, his surgery was the following Monday, and by Wednesday – he was back home, pain-free and on the road to a quick recovery.

According to Bryan, after meeting with Dr. Crovetti – the rest was, well, just common sense. “My experience with Dr. Crovetti was exactly what I was looking for. He was pleasant, straightforward, and down-to-earth. He spoke to me about my condition in layman’s terms, like I was a friend, and made sure I understood everything. He wasn’t ‘superior’ – he answered all my questions and I felt at very much at ease when we were through. So I had no qualms in scheduling the surgery to happen right away – because the pain was a constant factor in my life – and I knew he was the one who could change that.”

Bryan continued, “One thing that had a huge impact on me – and it sounds so simple when you think about it – was that when he took my x-rays, he did it with a ruler on the table. Why? So that the 14″ incision the other surgeon mentioned could be reduced to only 8″, because Dr. Crovetti knew exactly where he needed to work. That one thing was a big deal to me because it showed me one more level of his attention to detail. He also wasn’t going to cut my muscles and tendons – but simply move them aside during the surgery, and place them back when he was done. So obviously, that would help to reduce my recovery time, too. It just seemed to me that common sense, combined with skill and experience, were going to result in a better outcome for me.”

The state-of-the-art surgical suites and recovery rooms that Dr. Crovetti has pioneered here in Las Vegas were another huge plus in the equation. As Bryan states, “I had never had any type of medical procedure done in my life. Never broke a bone, never been sick in a hospital. So I was a bit scared of not only the surgery itself, but also the possibility of getting a staph infection while recovering – because I had friends who had gone through that and it was frightening. But with only six recovery suites, a squeaky clean environment, and a small superb staff, I didn’t worry about those things at all.”

So how did the surgery turn out? According to Bryan:

“The pain relief was IMMEDIATE. I couldn’t believe those years of suffering were gone in an instant. Dr. Crovetti’s staff had me up and working on my rehab within 3 hours of the surgery – and I was doing great. For the next two days, I had visits from Dr. Crovetti and the physical therapist, the staff took great care of me, the beds were the most comfortable I’d ever slept in, the food from the restaurants was great. It was the best possible outcome and experience I could have hoped for.”

In fact, a few months later when visiting his son in Texas, he ended up spending his entire 8-day visit in the hospital with pneumonia. “It was the worst experience EVER. I would rather have 10 more hip replacements with Dr. Crovetti any day, than go into a regular hospital like that again!”

These days, Bryan carries around a great collection of photos on his smartphone – of his x-rays and his recovery experience. Apparently when you’re taking a road trip on your Harley, or out on the boat with your son, it’s a great opportunity for a “That was then – this is now” moment. One that Bryan’s wife, Brenda, summed up perfectly for Dr. Crovetti just following her husband’s surgery: “Thank you, doctor, for giving my husband back to me.” Really – does it get any better than that?