Elvis is Back in the Building (sort of!) 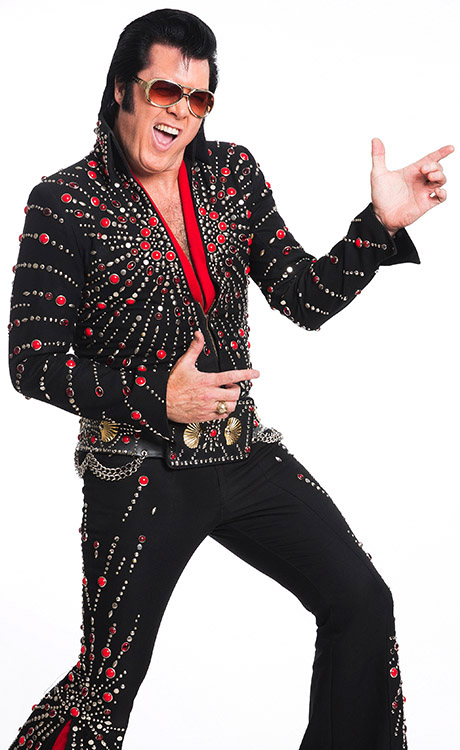 You may not know this, but Brendan Duffy is one of the best actors . . . ever. He’s so good, in fact, that most people never had a clue. Well, let’s rephrase that: Most of the 3,000 couples who get married every year at Graceland Chapel in Las Vegas never knew that the “Elvis” performing their wedding ceremony was suffering from excruciating pain virtually every moment. And even more ironic was this: that pain was in both hips.

Brendan has been an Elvis impersonator for 21 years, and as owner of Graceland Chapel he estimates that he performs a wedding ceremony in that persona every 15 minutes. Do the math and at over 3,000 weddings a year, that’s a whole lot of hip-shaking goin’ on. But as he reveals, his career choice had nothing to do with how that hip pain came about.

“It began back in 1993 when I was going to school in Hawaii,” he recalls. “I crashed on my moped and broke my right leg. The doctors set it, I went through rehab, and afterwards I moved on to UCLA to get my Fine Arts degree. I was young, I figured you break things, you get fixed, you go on.”

But it was while under the care of the doctors at UCLA who were trying to determine the cause of the increased pain he was having that they discovered his leg had been set wrong to begin with – but now it was too late to correct it.

“I’ve been living with the pain since then – going through every type of treatment or therapy the doctors recommended for the next several years,” he continues. “Finally at 38, I remember I was walking a bride down the aisle when I suddenly started experiencing a new and very intense pain. Doctors diagnosed severe arthritis in my right hip, but because I was so young, they didn’t want to do a hip replacement. I had to find a way to live with it – and it was tough.”

For most people, living with that kind of pain isn’t easy. But when your livelihood depends on creating a memorable impression of the most famous swivel-hips in history – let’s just say things can get a little more complicated.

“There are certain moves I have to perform as Elvis that were really painful. But everything – even the single step to get up on the podium at the chapel was a challenge. I had to think about every step I took, every move, because I had to be in a specific spot and in a certain position to be able to navigate that step every single time. It was physically and mentally exhausting,” Duffy explains.

Even given all that, Brendan never realized just how insidious the nature of his pain had been. With a slow, gradual decline over so many years, it’s easy to forget what “normal” is – because living while having to change everything about what you can physically do and constantly having that level of pain on your mind actually becomes your new normal.

Fortunately for Duffy, he was still open to solutions. And it was about this time that it seemed everywhere he went, he began to hear about this “Dr. Crovetti” person.

“People kept telling me “you need to go see Dr. Crovetti!” And then a neighbor of mine who was a former NFL player said Crovetti had replaced both knees and one hip. After seeing that success story with my own eyes, I knew I had to see this guy. On my first visit to his office, he said he was amazed that I was even able to walk. And it was pretty quickly decided that I needed to have my right hip replaced. That was in 2014.

“The insurance I had at the time required me to have the surgery at St Rose, and immediately after I woke up, I was amazed that the pain I have lived with so long was completely gone,” reveals Duffy. “I hadn’t realized just how bad it was, and suddenly, I wake up and I’m able to not think about my hip! That might sound strange, but it was a big deal. For years, nearly every waking moment had been spent thinking about how to accommodate it – how to move, how to sit, how to sleep, and one that most people don’t have to worry about . . . how to be Elvis. I can honestly say I wasn’t able to go 20 seconds without thinking of it all those years – so this was huge!”

In a development not uncommon for those with this condition, the years of using his other hip to overcompensate for the failure of one ultimately meant that the best solution for Brendan was to replace the other hip, as well. So that’s what he and Dr. Crovetti did in January of this year. And the outcome was equally successful – but with one interesting twist.

According to Brendan, “For my second surgery, I had insurance that allowed me to have the procedure done at Dr. Crovetti’s surgical center and recovery suites – and that was like the difference between night and day! At St. Rose, your recovery isn’t one-on-one, it’s more of a group experience. Plus, it was noisy and so busy all the time, I wasn’t able to get any rest.

“But at Dr. Crovetti’s surgical center, it was like staying in someone’s home. It was quiet, the room, the bed, the food – it was all great. And the nurses were always available; they made you feel as if you were the only patient there. It was such a superior experience, I didn’t want to leave,” Duffy laughs. “Looking back, though, I’m glad that I had the surgical experience in that order – because it would have been awful to have done them the other way around. Once you experience Dr. Crovetti’s recovery suites, there’s just no going back!”

Just like many of Dr. Michael Crovetti’s patients, Duffy wishes he had done his hip replacement surgeries years earlier. “There’s a reason he’s so well-known,” Brendan adds. “He’s cutting-edge, always trying to be better, always striving for perfection. He’s real and down-to-earth, and it’s easy to communicate with him. Don’t get me wrong, though – he’s not going to ‘baby’ you! He got me up and walking just hours after my surgery, and my recovery was better for it.

“You know he’s got to be good when even your mom is a patient. She’s getting her knees done soon, too. And now I’m back at work, pain-free and enjoying every minute of the ceremonies I do. In fact, I’m pretty sure that when the time came, this is the doctor the real Elvis would have come to see, too!”