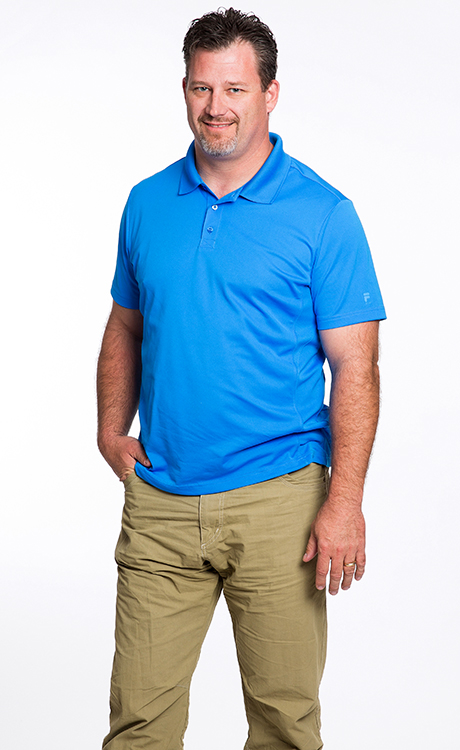 It was in his late teens that Tony Berti began his personal education about learning how to “power through the pain.” He was just 18 when he tore the cartilage in his right knee. But he had dreams for his future, so he lived with that pain, accommodated it, and kept right on pursuing his goals of both a college and pro football career. His success is a testament to his drive and physical determination – from a career that started in 1995 with the San Diego Chargers and came to a close in 2000 with the Green Bay Packers.

“When you’re young, you don’t look at knee pain the same as when you get older,” explained Berti. “It wasn’t as bad at first; but by my late 20’s, I knew it wasn’t right. Once I was in my 30’s, I realized the problem wasn’t really just mine anymore. The pain was, of course, and it continued to get worse. But now I had a family of my own, and my pain was taking a toll on the quality of our time together.

“I tried not to let it affect me, but I was having to make excuses not to do things with them because of my knee. I’ve always been active, and I really wanted to be involved as my kids started getting into sports and other things. For a few years, I wore a DonJoy ortho brace, which worked for a while. But eventually, it was clear that something else had to be done because it was affecting the entire family – not just me.

Tony’s condition had been a slow decline over 15 years or so, and subtle changes over such a long period aren’t often noticed so clearly. Through those years, he had seen doctors for his condition, trying treatments and pain management options. He also had some major back problems from his football history, which was exacerbated in combination with his knee injury. Eventually, he realized this was slowly becoming a daily problem for him, and it was right around this time he met Dr. Michael Crovetti.

“I met Dr. Crovetti about 7-8 years ago through some friends of mine, and I went in to have him check out my knee. Afterwards, we agreed that I wasn’t in great shape, but it wasn’t terrible. I probably shouldn’t run, but I could do other stuff. A couple years later, he scoped it and cleaned it out, and I kept on going. He said then that I really needed to have my knee replaced – but it wasn’t time yet. I remember him telling me, “When you’re ready, you’ll know – and then you’ll tell me.”

The breaking point finally arrived in July 2015, while Tony was 5 days into an 8-day fly fishing trip with some buddies in Utah. “One day, I sat down on the riverbank, took off my waders, and saw that my knee had blown up like a melon. I stayed on the trip until the end, but then had to have 150cc’s of fluid drained out of it. That was when I told Dr. Crovetti I was ready to have the surgery. The only thing was that I needed to schedule it around my organization’s slower time, which was a few months off. He was great about working around my schedule – and in the meantime, he helped me keep going until then.”

The reason for that July-to-December delay was due to Tony’s work with Goodie Two Shoes. As co-founders of this Las Vegas-based 501(c)(3) charitable organization, Tony and his wife, Nikki, both have pretty busy schedules. What they began in 2003 as a meaningful continuation of a similar program they participated in during his time with the Chargers, has turned into a full-time venture that provides over 10,000 disadvantaged children in Las Vegas each year with new shoes, socks, and other needed items. Originally a one-day annual event, Tony and Nikki have evolved the organization into year-round outreaches with major sponsorships that take place at multiple schools and other events.

“Being able to take part in these Goodie Two Shoes events – which can literally be a life-altering experience for these children – is incredibly important to me. Dr. Crovetti understood that completely and worked with me on the timing. There was no pressure – from my first visit to him to when we made this final decision. That’s one reason I was really comfortable working with him as my surgeon.

When December rolled around, Tony’s knee replacement surgery finally took place. “The surgery was shockingly short,” he reveals. “I was in and out of the surgery faster than I expected, and then I was up walking with my Physical Therapist that same day. I spent a couple of days in the surgical suites – where the nurses were fantastic, and the nurse-to-patient ratio was amazing – then I went home and started my home health therapy right away.

“After the staples were removed a couple of weeks later, I went into outside physical therapy. One thing I noticed right away was that patients of other doctors weren’t progressing as rapidly as I was. Their doctors took a more conservative approach to recovery – which meant a longer rehabilitation. But Dr. Crovetti is very much about getting you back to moving right away, like when I was up and walking the same day of my surgery.

“As a result, three months after my surgery, I was able to play beach volleyball with my kids on a trip to Florida with no pain. At six months, I felt healed. At 12 months, it was even better. Now I feel like I can do anything – and it’s really been life-changing for me.

“I had a mental block, I guess, about waiting until I was 60 for a knee replacement – but I couldn’t have been more wrong. Knowing what I know now, I can see that waiting was just dumb,” he laughs. “I’m back doing all the things I love with my family and my work, and I’m still far from being 60 years old!

“A huge reason for that is because Dr. Crovetti is so different from other doctors I saw. He really cares about his patients, and more than that – he’s a genuinely likable guy. There was never any pressure from him to do things I wasn’t ready for, which I appreciated. He’s progressive, enthusiastic, and he has truly mastered his craft – as well as the entire experience surrounding it from the first meeting all the way through recovery. He’s got a great staff, recovery suites, food, comfort – and he’s absolutely all about improving his patients’ lives and getting them moving pain-free again. I’m definitely proof of that, and that’s why I’m happy to refer my friends and associates to him all the time.”