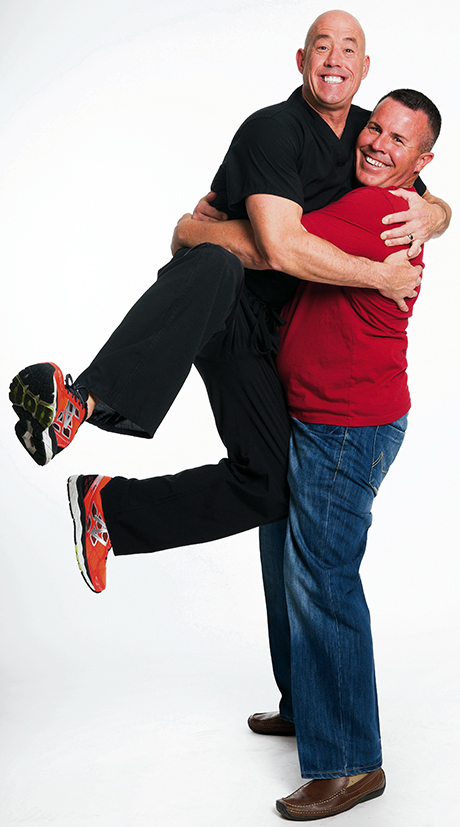 Despite the fact that Jeff Daun has been pretty physical all his life – from his 20 years in the Air Force (including a turn in Iraq), and further back during his school years with wrestling, football, and basketball – he’d never broken a bone in his life. Probably not a lot of people with his history can say that, but in Jeff’s case, it worked out pretty well, he thought. Because one thing he knew for sure was that he was never “big on dealing with doctors.”

That also explains why it took him about 10 years – with at least five of those years spent with considerable hip pain and immobility problems – to agree to his wife Joyce’s ultimatum: “You’re going to see Dr. Crovetti, and I’m going with you.” It turns out that chronic pain may be the great equalizer, because this time, he had no objection to following her lead.

“I began experiencing problems with my hip around 2002, and the pain showed up pretty quickly – although I had no idea why. There was no injury I could point to, and I had been physically active all my life,” Jeff remembers. “So I just dealt with it on my own. I started taking things easier – bicycling rather than running, things like that. Years went by and almost without even realizing it, my life slowly began to revolve around the pain. I couldn’t do things with my family like go on vacations, or anything that required movement, really. I was doing a whole lot of laying around, taking plenty of Motrin, and I don’t think I slept during the last five years of it.

“I finally saw it wasn’t just seriously impacting my own life – it was having an effect on the lives of those around me, including my family and my friends. It really hit me one day when I realized it was taking me 3-5 minutes just to get my socks and shoes on. Not only was this not normal, I knew it wasn’t worth it. That was about the time Joyce brought up Dr. Crovetti. So despite my lifelong aversion to doctors, I was ready to do something – anything – to make the pain stop.”

One of the things that helped Jeff get to that point was when one of his good friends who had been suffering from similar pain had his hip replaced by Dr. Michael Crovetti. “I saw how well and how quickly he was recovering, and I was actually a little jealous about it. In fact, that was probably my biggest motivation – seeing how well it turned out for Ken, because it made me hopeful that could happen to me, too.”

So Jeff and his wife went to meet with Dr. Crovetti, and they had a good feeling about him from the start. “I walked in, sat on his table, and he immediately looked at my shoelaces and said, “Ah, it’s your right hip, huh?” Jeff laughs while remembering Crovetti’s detective-like deduction. “It was because I couldn’t tie my shoe in the center due to my hip pain – the bow was off to one side. Apparently, that’s quite the giveaway to an orthopaedic doctor!”

“But he also had a great bedside manner. He was honest and straightforward, and it seemed that I could trust him. We did some x-rays and tests, and discovered that my problem was arthritis and degenerative bone disease that had progressed to bone-on-bone pain. He told me whenever I wanted to get the surgery done, that pain would go away. But even with all that – I still waited another 2-1/2 years before I had it replaced.”

In 2012, though, Jeff decided it was time. And even though he was shy of doctors and especially hated hospitals, he took the step and was surprised at how easy and smooth it all went.

“Having their own surgical unit – and not having to have surgery done in the hospital – is the most awesome thing in the world!” he explains. “I had my surgery in the morning, and I was up at 2pm walking down the hall – with some help, of course. But the pain I had for all those years? Instantly gone. I was amazed. And absolutely everything about being there was great – the nurses, the food, the rooms, the rehab. I can’t say enough about what an excellent experience I had there.”

So good, in fact, that when a few short years later, his other hip began bothering him, he remembered Dr. Crovetti explaining that would occur faster than the first one did. After years of compensating for the condition of his right hip, when Jeff felt that pain in the other one, it was immediately recognizable and he didn’t think twice about having that hip replaced when the time was right.

By the time Jeff made the decision to pursue his first hip replacement, his office pals had given him an amusing – but unfortunately accurate – nickname: Pterodactyl. That was because his walking gait had gradually changed to much slower and smaller steps. Following his second hip surgery in 2016, Jeff recalls “It actually took awhile for me to re-train my body to walk normally after that, I had gotten so used to being so cautious and in pain. But now, that nickname is history!”

Today, Jeff doesn’t have to think twice about a lot of things that might have given him pause before.

“First, I don’t have to worry about making plans and being physically active, and my family is thrilled about it. Just the “going” is the big deal now – we’ve been to Jamaica and Costa Rica, gone ziplining, snorkeling, and biking through the jungle. No more pain medications, no more arguments or having to disappoint anyone. My life is just back to normal now, and it’s great.

“Second, I can’t express enough that if you have this type of pain, there is a doctor out there for you. For me, it was Dr. Crovetti – and I’ve actually referred a number of people to him. My niece, a bi-athlete, is one. She had both her hips replaced and is doing fantastic.

“In fact, I’m very pro-doctor and pro-surgery now about joint pain. The right doctor will know if it can help you or not. And if it will – I tell people to go through the surgery and the recovery – and then your life is going to be a lot better. That’s what happened to me, and to a lot of other people I know.

“My only regret is that I waited so long to do it. But from what I’ve learned, that’s a pretty common complaint around Crovetti Ortho!” laughs Jeff.