June Wanted to Keep Doing It All. There Were Just Two Hitches (In Her Hips) 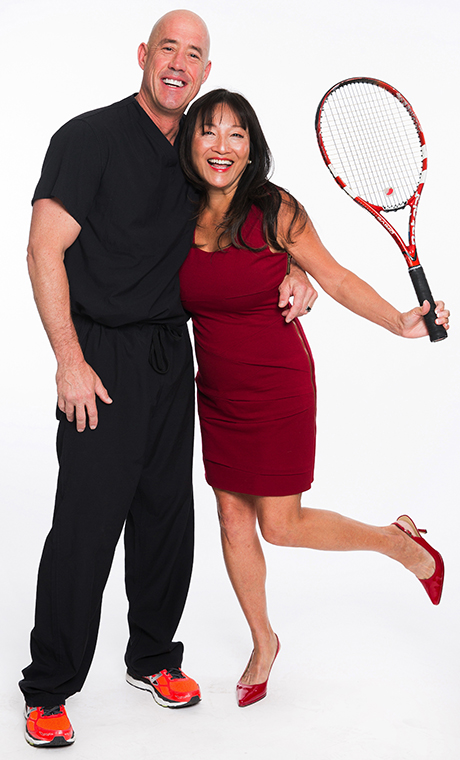 “It was funny being sort of a ‘mini celebrity,’” June said with a smile. “As one of Dr. Crovetti’s “I Can Again” patients, I recently had my story videotaped and photos taken with him. But I didn’t realize one of our photos was in an ad on the back of a local ZIP Code magazine until my friends and colleagues started calling me about it. One of them event posted it on their Facebook page, and I got 120 “Likes”! Who knew?” she laughs.

But it wasn’t long until June was on to the next thing – and then the next, and the next after that. You see, June has her own court reporting business – which was part of her master plan. She knew being able to set her own schedule would allow her the time to do the things she really enjoyed.

“I’ve always been very active and extreme in my activities,” June explains. “Keeping my body healthy and in shape is important to me. It always has been, because it gives me the chance to follow my passions. I’ve played a lot of tennis, and been to the Nationals for both Women’s and Senior teams. I’ve done tons of weightlifting and cardio, and for many years I competed in English Dressage and Jumping. Travel is also high on my list. I’ve gone whitewater rafting in Bali, had some great adventures in Africa and the Galapagos Islands, and I’ve hiked in countries around the world.”

In other words, June’s been busy enjoying life. Perhaps that why when she started to feel some pain in her hips, she just attributed it to getting older. “That’s life,” she thought. But as time went on and the pain kept getting worse, she came to realize it was something more.

“The first couple of years, I was limping and in some pain,” she reveals. “But before long, I was having to literally pull myself up the stairs in my home using the handrail. I was really miserable, so I went to see some ortho surgeons. They discovered that osteoarthritis had contributed to my hip deterioration, and at some point, they would need to be replaced. At first, though, they recommended pain injections, which work well for a lot of people, I guess – but they didn’t for me. The effects from the first one lasted 6 weeks, and the second was only 2 weeks.”

In typical “June Style” – she figured if she couldn’t get rid of the pain that way – she’d try something different. “Perhaps it was just a matter of gaining strength,” she thought. That led to working with a Physical Therapist for an intense 12-week program. When it was over, while she found she had increased her mobility a bit, it did nothing for the pain – which continued to get worse.

“The final moment of acceptance for me came when I was hiking Cinque Terre in Italy,” she explains. “I’m in this beautiful mountain village on the Italian Riviera coastline, doing what I love – and I suddenly stopped and said “This is it. This isn’t my life anymore.” The pain had taken over, and June faced the fact that she had to find a real solution.

When she got home from Italy, she started doing her research. “I’m always prepared – that’s what court reporters do!” she says. It didn’t take her long to discover from her own circle of active friends and her work colleagues that Dr. Michael Crovetti was someone she needed to meet with.

“I discovered that a friend’s husband, in fact, had gone through two hip replacements with Dr. Crovetti just a few months before,” she recalls. “It was so helpful for me to see how well he was doing. Hearing about his experience and actually witnessing his recovery was a big deal. In fact, I don’t know if I would have had the nerve to move forward with my own surgeries without seeing him.”

“So, I put my list of questions together and made an appointment with Dr. Crovetti. Before we even got to that, he took one look at how I walked and said, “Well, you know. Your hips,” she laughed. “I sat down and asked him the hard questions, and he gave me straight, honest answers. I was very impressed with him. He told me, “Your hips were probably ready 2-3 years ago. But everybody has different pain levels. That’s why we wait for the patient to tell us when they’re ready.” And now, June was ready.

Timing, however, was an issue for her. “I first saw him in the summer, and I knew I wanted to have the surgeries done back-to-back, which is about 5 weeks apart. But the slow time of year for my business is November and December. Dr. Crovetti was great about working with me on that timing – both for my work and my insurance needs. I had my first surgery in November 2015.”

“On the day of my surgery, and right before it started, he had a very easy and confident demeanor. I wasn’t worried at all because I knew “he had this.” And he did – because when I came out of the surgery, I was immediately pain-free. Of course, there was the surgical site pain – but as far as the tremendous hip pain I’d had all those years – it was completely gone,” she marvels.

“And my recovery was amazing. First of all, his team is the best. The staff and the suites are wonderful, and the ratio of patient to care staff is great. Even better, I was off painkillers within a week after the surgery. After 5 weeks, I was ready for the second surgery – and it was even easier. I was mentally prepared for it, and it was like my body just knew what to do,” June explains.

Since then, June has been working back up to her old schedule. She’s been hiking, playing tennis, and even picked up playing pickleball. She’s hiked the Columbia Gorge, been ballroom dancing with her friends, and is shortly heading off to Morocco – where she’s already booked herself a camel ride across the Sahara.

“I couldn’t be happier with how everything has turned out,” she states. “It all went exactly according to plan. The surgery, the recovery – and at my 1-year follow-up, Dr. Crovetti told me that I had 100% bone growth and both my hips were fully recovered. I’m now one of his biggest fans – just like all the people I spoke with before I met him. Thanks to Dr. Crovetti, now I’m looking forward to many new adventures after Morocco!”