Knee Replacements: What’s Age Got To Do With It?

Tracer Finn. If you know anything about BMX racing in Las Vegas, that’s a name that rings a bell. In fact, you could say that he’s the guy that put Las Vegas on the BMX map back in the late 70’s. Renowned for his style and jumping abilities, his first big win on the racing circuit was at the Corona track in 1978 – and from there, he simply exploded on the scene.

His passion for excellence let him to become a master of the sport for the next several years, holding multiple Nevada State titles and jump competitions. Stand-outs include doubling at the 1981 Mongoose International Championships, and his second placement at the 1982 IBMXF World Championships in Dayton, Ohio. Sponsored the majority of his career by the newly-created CW Racing, together they built a lasting BMX legacy in Las Vegas that ultimately led to Tracer’s recent induction into the National BMX Hall of Fame.

For Tracer, though, it really all boiled down to the love of the sport. He kept it clean by riding safely and staying healthy, and through the years he’s dedicated himself to helping young kids discover the joys of BMX by mentoring and holding bike rodeos and safety clinics. Even today he stays connected, working with T.J. Lavin, an avid BMX rider now the host of MTV’s “The Challenge,” and also by competing in the ‘cruiser’ classes at ABA nationals.

That’s the Tracer Finn that the public knows. But there’s another side to that story. One that began with his first serious injury in 1982.

“It was pretty bad” Tracer recalls. “I tore my ACL, but I had a tour to go on, and back then, things were different when it came to sports injuries. The idea of surgery at that time was just ridiculous. It would have required a huge undertaking and a lot of time off. BMX is a short-term career, so we treated it as best we could so that I could keep competing. The attitude at the time was pretty much ‘Let’s drain it, and then you’ll just have to suck it up.’ So that’s what I did. As it turns out, that was the start of what became a long and painful medical history.” 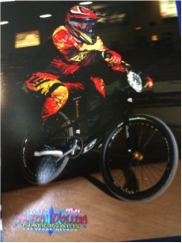 After about 5 years he had the ACL replaced, wryly observing now that “Cycling is the best thing for your knee – but crashing isn’t.” Nevertheless, after recovery, he went back into racing for a time – but not surprisingly, he tore the same ACL again, and began gathering several other injuries along the way. “In BMX then, my knees were the shock absorbers, no one even wore helmets. If I knew then what I know now, I would have treated my body differently.”

At a relatively young age, Tracer discovered that he was in pain virtually all the time. “I could walk, but that was pretty much it. My doctors had helped me to do all the maintenance I could to extend any level of relief, but I was always hurting, eventually getting to the point that I was unable to do many of the things I enjoyed. Anything with active, fast movement became impossible. By this time I had married and had a family – but I would have to sit on the sidelines while the kids water and snow-skied, raced BMX, rode motorcycles. My knee just wouldn’t let me be part of that, so my quality of life just plummeted.”

Things stayed pretty much the same for the next 20+ years. And in looking back today, it appears the biggest hurdle that Tracer had to overcome was his personal view of joint replacement, in general.

“‘Old people’ get knee and hip and other joint replacements,” he remembers thinking. “And I wasn’t old.” In fact, Tracer was anything but old – less than 20 years of age at the time of his first injury. “I had no idea that younger people could be candidates for joint replacements. Remember, this was back when if you had an injury, you went to a regular doctor, not a ‘sports injury specialist.’ For over 20 years, I had just gone along with the flow of the system of medical care at the time, and trusted that I was being given the right choices and direction. Looking back now, I can see that I just passively accepted their program, listening to other people – who didn’t have all the information available – make decisions and perform procedures that affected my life and my future. When they finally said there was nothing more they could do, and I would be spending the rest of my life in this tremendous pain, I realized then I had nothing left to lose.”

So like a true BMX’er, Tracer took back control. After a conversation with his friend, T.J. Lavin – who had found lasting results for his injuries with his orthopaedic surgeon – Tracer decided to go pay a visit to Dr. Michael Crovetti, too.

“He took one look at my MRIs and all the reports I had amassed up until this time, and he got straight to the point. He gave me my options – which were basically to wait 15 years (I was 45 years old at this point), limping around in pain until I believed I was “old enough” to get a knee replacement. Or I could get it done now, recover relatively quickly, and be able to get on with my life.

“It was an eye-opening moment for me – to realize there’s no ‘age-timetable’ for things like this.” Finn did laugh a bit when he revealed that “in fairness, I was sort of right – because Dr. Crovetti showed me clearly in the films that after all the damage I’d suffered from, along with the resurfacing and other treatments that I’d gone through over the years – my knees were already like a 70-year old’s.”

Within 2 weeks, Dr. Crovetti’s team had helped him navigate the seemingly endless trail of insurance paperwork that he had to go through, and his surgery was scheduled. “I was amazed at how they just took the ball and ran with it,” Tracer recalls. “They made it so much easier on me and it was all handled perfectly.”

A bit apprehensive while heading into surgery, Finn also recalls clearly, “The last thing that Dr. Crovetti said to me on the way into surgery was: “I’ve got this.” Right then, I realized that he spoke my language. He put me at ease because I realized what this man does is put people back on their feet to continue what they do – without pain.”

And he was right. Immediately after the surgery, the pain Tracer had lived with for decades was gone. “It was life-changing. I still had to recover from the surgery itself, of course. But once my initial pain was gone, I put myself on the fast track to getting my life back. Dr. Crovetti’s office had the physical therapy machine in place at my home, I began working with a great PT, so all I had to do was keep living – and concentrate on getting better.”

That was 4 years ago and today, Tracer Finn’s life is completely different. For the past 30 years, Tracer has worked with Wynn as a lighting manager for some of the most famous shows on the Las Vegas strip, and currently works Le Rev. “It’s a very physically demanding job, requiring agility and a lot of movement – so being able to do that pain-free now is amazing.”

But more important than that is getting his personal life back – the way he always wanted it to be. “I started out slowly the first year, afraid to damage anything because I was so happy to be pain-free,” he states. “But gradually I realized I could golf, so I went on to mountain biking, then riding BMX. Now I do some racing (in the Veteran classes, of course!), and can snow and water ski, mountain climb, and scuba dive. Today, I’m more athletic than I ever believed I would be again.”

There’s a saying from his BMX racing days that Tracer uses often. In fact, it’s pretty much his motto. Referring to that time just before the race begins: “You have to line up.” That’s exactly how he feels about Dr. Crovetti – “He lined up and did exactly what he told me he would do. He gave me back the life that I’ve been missing. Now I’m the one who gets to make the best of the results. And they are truly great results!”