Not Too Early, Not Too Late – Coach Tom Hallett’s Knee Replacement Surgery Was At Just The Right Time 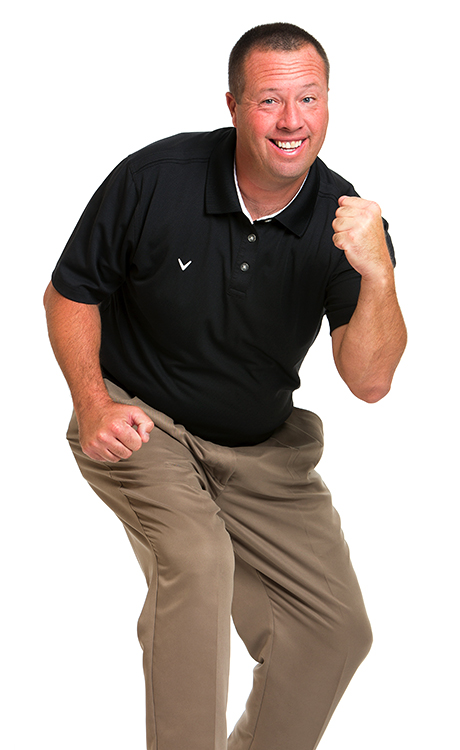 Tom Hallett isn’t one of those patients who laments he “should have done it sooner” when talking about his Total Knee Replacement surgery. Because he never bought into the concept in the first place that you need to be “old” to get a new lease on an active life.

“I’ve been a P.E. teacher in the Clark County School District for over 18 years,” Hallett reveals. “All my life I’ve been athletic. I played four varsity sports in high school, Division 1 baseball in college. I was a pretty typical teenage guy and hard on my body. But I kept playing after college, then became an Assistant Athletic Director.

“So I was familiar with the injuries that come along with playing sports, as well as the treatments available for them,” he continues. “Because of that, I never had the mindset of being “too young” to have joint replacement surgery. My feeling was it doesn’t matter if you’re 23, 33, or 53 – if you need it, you need it.”

Unlike many patients, Tom didn’t wait until the pain was “horrible,” he said. As a player and a coach, he was aware of how sports injuries progress over time. He was 44 years old when he knew it was time to find a more permanent solution to his knee problems, after having numerous arthroscopic procedures done. The deciding factor for him was when he wasn’t able to run anymore.

As he recalls, “It was inevitable that my knee would need to be addressed, and I didn’t want to procrastinate. I’m active in my work and with my kids – so I chose to be pro-active about taking control of my health.

“I knew I was on the young side of having the surgery done, and I also knew that mathematically, I might be a candidate for a second surgery because of my age. But my feeling was – and still is – if it happens, it happens. I wasn’t going to allow my entire life to be compromised by pain. And there was never any doubt in my mind that Dr. Michael Crovetti was the man I wanted to take care of it.”

Whether it was a coincidence or fate, about six years earlier Tom’s wife, Kathy, returned to work when their kids got a bit older. And it happened to be as a new member of the staff at Crovetti Orthopaedics.

“Of course, this was long before I was thinking about surgery,” comments Hallett. “But it gave me an opportunity to get more of an ‘inside scoop’ on my (future) doctor than most patients have a chance to experience. Kathy loves everything about working for him; and from her association she knew that he was very objective, very professional, and very down-to-earth.”

Tom goes on to explain, “That’s why when it was time for me to explore TKR, there was never a question about seeing anyone else. Dr. Crovetti helped to guide me through the process and we just did what needed to be done.”

Another important factor in his decision to choose Crovetti Ortho was the decreased post-op infection rate at their surgical and recovery suites, as opposed to those who have surgery done in the hospital. Hallett’s surgery took place on a Monday morning and by Wednesday afternoon he was back home – already mobile and able to work regularly with his Physical Therapist.

“My surgery was a first-class experience – with round-the-clock nurses and my Physical Therapist on-hand. The meals were great, the room was amazing, and yes – I might have had a little special attention from my wife while I was there,” he laughingly admits. “But I was up and moving right away. I think I must have walked 200 yards up and down the hallway those two days.”

In the case of Tom’s surgery, there were some issues to address after the fact, but according to him it was just another example of how Dr. Crovetti is always there for his patients – before, during, and after their procedure.

“I know some people just whiz through the surgery and recovery,” states Tom. “But everybody is different. I was having some issues bending my knee following the surgery due to scar tissue, so we just went back in and Dr. Crovetti cleaned it out. Now, I’m done with my P.T., back to riding my bike, doing the elliptical, and I’m feeling great.”

“In fact, I’ve sent many of my friends with joint pain to see Dr. Crovetti – every one of which has enjoyed a great outcome and ultimately ends up feeling the same way I do about him: He’s the man!”