Shouldn’t The Choice to Live With or Without Pain Belong to the Patient? 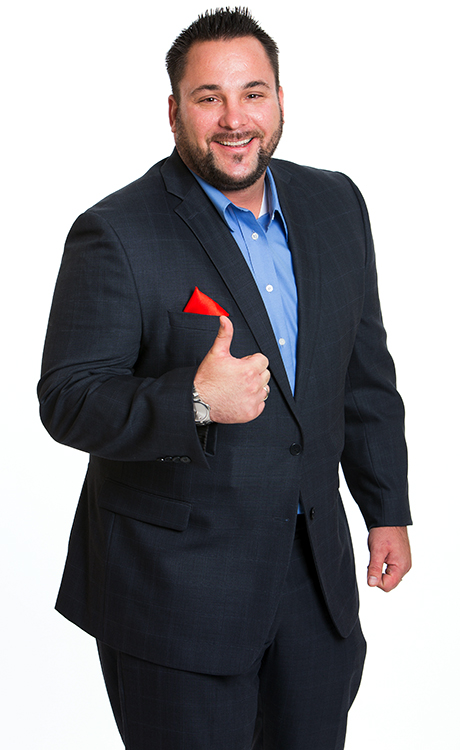 At only 35, it’s hard to believe that Brad Wolfe had been living with the long-term effects of a major knee injury for over one-third of his life. But today it’s a different story. After he met Dr. Michael Crovetti and underwent TKR (Total Knee Replacement) in October 2014, he’s been living a pain-free existence. But it was a long and painful journey to get there – and looking back, Brad thinks it could have been different.

“I actually hurt my knee when I was only 20, while I was in the Marines,” Brad recounts. “I had torn all three ligaments and the doctors thought they had fixed it – but I guess I tried to come back too fast. So they “fixed it” again. Back in those days, they gave you Ibuprofen, and you just kept going. I should have realized, though, that it was vulnerable – because even after I got out of the military, I injured the same knee again.”

Over time, the discomfort only got worse and the condition of his knee steadily deteriorated – until eventually, it became bone-on-bone pain that he endured for over 10 years.

“Through those years I saw many doctors, and they all gave me pretty much the same prognosis: “Yes, it needs to be replaced – but you’re too young to do that now.” I wanted to move forward and take care of it, but no doctor wanted to do it,” he recalls. “Instead, I started depending on pain medications more and more – to the point that the last couple of years, I was constantly worried about whether or not I had my meds with me at all times because the pain would just be overwhelming.”

Brad remembers how his knee pain affected his entire family’s quality of life. “I couldn’t play with the kids, I couldn’t do simple things that most people take for granted,” states Wolfe. “I was an active guy – in the Marines I wrestled and boxed – but now I couldn’t even walk without my knee swelling up and throbbing with pain, so you can imagine the impact it had. I was tired of living on pain medications – and I really didn’t like how they made me feel. It wasn’t a life, you know?”

Fortunately for Brad, he found his way to Dr. Crovetti with a little help from serendipity.

Brad and his wife, Mary, are the owners of a local Las Vegas real estate company. And Brad recalls that: “When I went to work, I would be wearing a knee brace, and people who worked in the same building began referring me to Dr. Crovetti. In fact, five different people – one after another – kept telling me that he was the man to see. They all had great success stories to share about an experience with him – so I decided I really needed to check him out,” Brad recalls.

Once Brad Wolfe and Dr. Michael Crovetti met and reviewed his condition, they made the decision to move forward with replacing Brad’s knee so he could get his life back and eliminate any more years of unnecessary pain.

“It wasn’t just the medical expertise he had,” Brad states. “It was that he understood ‘the big picture’: that simply because I was injured as a young man, it shouldn’t mean I should have to live with excruciating pain for decades, or be stopped from living a full life now. After all, what’s the point of not taking advantage of medical solutions when they are available?”

“When the day came, everything went exactly as Dr. Crovetti had explained beforehand,” he remembers. “The surgery was a textbook success, the recovery center was great, and I received amazing care from his entire staff – from the office personnel to the nurses who were always there for me until the moment I left. Coming from my previous experiences with VA hospitals, it was quite a different experience.”

With the help of great physical therapy and follow-up, Brad was up and walking unassisted in only three weeks. All of his post-surgery x-rays and tests have been good, and today – life is entirely different for Brad and his family.

“I’m back to working out again, we’ve gone hiking at Mt. Charleston, and visited the wineries of Temecula. My knee feels great, I’m pain-free – and pain-medication free – which is fantastic. And my whole family is enjoying all the benefits that come along with those changes.”

“I hear people say this a lot – like when many of his patients came together to tell our “I Can Again” stories – but it’s absolutely true: Dr. Crovetti truly helped me get my life back again. I guess you don’t realize how incredible that is until you experience it yourself – but as far as I’m concerned, Dr. Crovetti IS “The Man!”