Clancy-Hayter’s Experience Confirms: The Quality of Your Medical Care Is In Your Own Hands 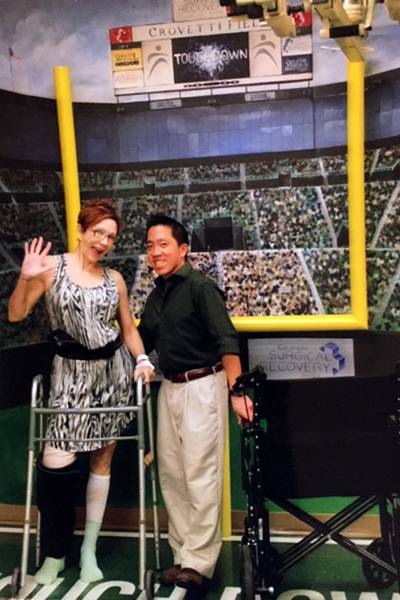 You know the drill: Sensible Diet & Regular Exercise = Good Health. It’s been proven true more often than not, of course. But even that formula can carry a double-edged sword. Because when it comes to ‘regular exercise,’ sometimes our personal preferences can run counter to our body’s optimum response to our favorite exercise.

Take running, for example. That was Erin Clancy-Hayter’s favorite way to stay fit. Short distance, to be exact – since she never really took to the marathon-thing. And when she combined her regular running workouts with her penchant for eating healthy foods, it was the perfect recipe for her in maintaining energy, youth, and overall fitness.

But fast-forward 10 or 20 years, and eventually Erin discovered, as many of us do, that our bodies aren’t always in line with the sports we choose. Whether it’s tennis elbow or runner’s knee, overuse and repetitive stress on a single body part can cause problems that ultimately require medical intervention of their own.

“Through my years of running,” relates Erin, “I had an orthopaedic doctor that I worked with on a regular basis – since it’s not uncommon for runners to have minor injuries from time to time. We made a good team, because he was a very good doctor and helped me make informed decisions that kept me in great shape for a long time – paying particular attention to my right knee, which caused me occasional problems. But when he retired, things changed.”

A new doctor took his place, and it wasn’t long before they began having different opinions of how her problem knee should be addressed. “Initially, things just continued along as they had. I opted to have some injections in my knee more as a temporary treatment – delaying the surgery that I knew would someday be necessary,” Erin continues. “But things took a bit of a turn when it was obvious that injections were no longer working, and I was just avoiding the inevitable.

“My new doctor recommended a partial knee replacement, and that’s what gave me pause. Although the pain was only in part of my knee, common sense told me that a partial replacement would only be a partial ‘fix.’ It didn’t really make sense to go through an invasive surgery and weeks of recovery – that might need to be done all over again after a short time for a full replacement. I already knew I wasn’t excited about 3-6 weeks of recovery to begin with – because for me, down-time is just not an option. So the thought of having to go through it twice did not appeal to me at all. When we discussed it, though, I didn’t understand his explanations, and the whole experience left me with more questions than answers. So, since I’m a big fan of getting a second opinion, that’s exactly what I did.” And a third, and a fourth, and . . .

Today, when faced with medical challenges -many of us do what comes next: Research. In Erin’s case, her due diligence was extensive; because this was, after all, a serious decision, and for a number of reasons.

As Erin remembers her dilemma, “First of all, I’m a single woman. My kids are grown and I’ve got grandkids I adore – and they all have busy lives of their own. So knowing that I didn’t have a built-in support system – someone who actually lived in my home and could assist me with my recovery – that was a huge consideration. Second, I already knew that I needed to be proactive about my health care – I always had been, and that has served me well. I needed to be asking the right questions not only of doctors and surgeons, but I also sought out everyone I knew who had gone through similar procedures. In some cases, I even talked with friends of friends – to learn as much as I could about the process, the recovery, the results — pretty much their entire experience.”

Erin’s drive to do the right thing for her body, and to choose the right doctor to do it – ultimately led to her to Dr. Michael Crovetti.

“I met with Dr. Crovetti, and I felt quite confident about him from the beginning,” reports Clancy-Hayter. “I had spoken with people he had helped, and everything I learned was positive. So when I told him about the recommendation for the partial replacement, he explained why that wouldn’t be the wise decision. As I suspected, he said that ultimately it would require an entire replacement – so why put myself through the surgery twice? He then was very patient in reviewing my x-rays and records, pointing out specific details on them, and he explained everything clearly, patiently, and most importantly, in layman’s terms.”

That last part – the layman’s terms – is one trait not all doctors share, Erin knew. And in her case, it was the deciding factor. All that remained to be done was timing: Talking with her family about helping with her recovery, gathering all the questions she had about what she could expect through the entire process, and scheduling a date for surgery.

“I was originally scheduled for October of 2014, but decided to move it to August up after a minor injury exacerbated the pain. The surgery was a complete success – and I could not be happier about the results,” she continues.

Immediately following the surgery, the original source of her pain was gone. “That was amazing,” Erin relates. “And I knew the next step was the recovery, but I also knew that I was going to push myself to be on the short end of that 3-6 week period.” That’s exactly what happened – and something she’s proud of, too. Her work with the physical therapist began that same day, and through persistence and determination, he was able to “cut her loose” after only 3 weeks of rehab.

“The entire experience of the surgery – before, during and after – was just incredible,” she reveals. “Dr. Crovetti, his staff , the nurses, the recovery suite, the therapist – it was all first-class, unlike any previous procedure I had undergone. I loved that I could order my meals from the menus of local restaurants. I loved their bedside manners and the clean and comfortable environment. In fact, it was so comfortable and everyone was so great, I even tried to stay one more day,” she laughs. “But I got sent home since I was progressing right on schedule.”

Commenting on Dr. Crovetti’s recovery methods, Erin states, “Actually, they are very progressive, and I agree with how it’s managed. Looking back, I remember my sister had a knee replacement done many years ago, too. At that time, the idea was to take it easy physically and to recover slowly. She did – and it took her months to get back to normal. I managed to do it in just 3 weeks . Knowing that was possible was one more deciding factor for me to have this chronic and painful – but not urgent- medical matter addressed,” she shares.

Today, Erin rides her recumbent bike and maintains her exercise/therapy schedule. Her healing continues to come along nicely (even the scar – which thanks to her own personal topical treatment plan of silicone gel, vitamin E, and other aids will be hardly noticeable in the next few months). She no longer runs for exercise, if you don’t count chasing her grandkids’ ball down the street – preferring to extend her new knee’s longevity instead. But today, Erin is pain-free and – thanks to her medical-assertiveness – satisfied that she made all the right decisions for her health.