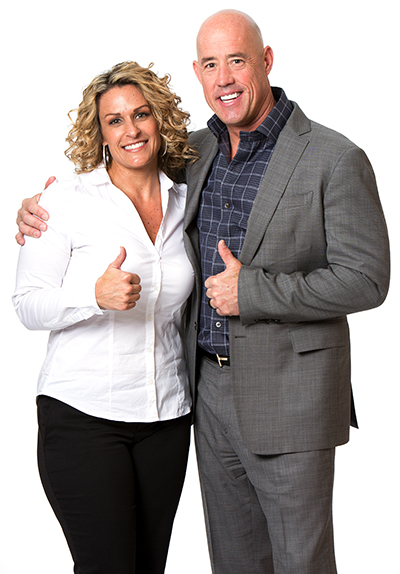 It’s amazing what the human body can adapt to. For example, when all you’ve ever known during your lifetime is severe joint pain, it becomes your “normal.” That’s precisely what it was like for Traci Martin – a young Las Vegas woman whose hip problems were simply a way of life; ones she had experienced as long as she could remember.

“The pain was always there,” reveals Traci. “And even though I always wanted to be active – I would work out and do the best I could to stay healthy – I always had to adapt my goals to accommodate my physical limitations. I knew it wasn’t ‘normal’ living with this condition, but it was all I had ever known. I guess I just tried my best to get used to it.”

That is, until life serendipitously led her to a position working with Dr. Michael Crovetti.

“I had known Dr. Crovetti’s reputation before I went to work for him,” commented Traci. “And during the years I was there, I saw so many people’s lives truly transformed following their joint replacements. They became active and pain-free again, and it was clear to me that his patients loved him. I had complete faith in him, too. But at the time, my pain levels were what I was used to dealing with, and I wasn’t ready to take my treatment to the next level.”

Eventually, Traci moved on to another position, and her life went on much the same as it always had. Doctor visits, x-rays, therapy, and not-always-so-successful pain management continued to be her typical routine.

But a couple of years later her hip began to deteriorate so quickly that it became a tortuous bone-on-bone condition. She met with Dr. Crovetti for his opinion – taking all of her previous x-rays and reports along – and together they decided to see if a cortisone shot wouldoffer Traci some relief.

“It only worked for about a month, though. That was in October 2014, and my hipjust started getting worse every single day. It was waking me up in the middle of the night, and my movements got more and more restricted. I knew I had to do something more.”

“Because of my age, my previous doctors said I wasn’t a candidate for hip replacement. But when I spoke with Dr. Crovetti, he was very down-to-earth about my options: I could have it done now and start to enjoy my life – or I could just allow the pain to worsen and continue for another 10 years until other doctors felt I was ‘old enough’ for the surgery.”

“So in December 2014, Dr. Crovetti performed my hip replacement,” a triumphant Traci announced. And as soon as she awoke following the procedure, for the first time in her life Traci was pain-free.

“The pain was instantly gone,” she remembers. “I mean, there was some discomfort that I knew was just surgical pain and would only be temporary. But that was a different type of pain completely than what I had been living with all my life.”

In similar fashion, Traci ‘s experience at Dr. Crovetti’s surgical center and her recovery in the surgical suites was a breeze for her. “The nurses said I was their favorite patient because I recovered so quickly. In fact, I didn’t even need physical therapy! I was back to work after 10 days, and inside of a week, I didn’t need to use my walker any more, either.”

Today, Traci’s life has taken an incredible – and previously unexpected – turn for the better.

“I’ve discovered what “normal” really is! Now I can do all the things I love to do, but that always came with the price of ‘discomfort’ before,” she states. “I’m on my treadmill, playing tennis, sprinting, working out with my trainer – and I’m getting into the best shape of my life.”

“There are still times when I’m walking and just think to myself “Wow! This is just so awesome!” I always walked with a limp, and now that’s gone. And I can wear high heels now whenever I want!”

“I know a few of these things might seem minor to some people. But when every move you make is painful, it can be psychologically debilitating. People see me today and the marvel at the change. Some of my neighbors have told me I’m like a walking miracle; and others see me and say I’m too young to have had a hip replacement.”

“My response? I tell everyone – if they need it, Do It Now! Don’t wait. Life is too short, and you should be able to enjoy the best quality of life while you’re young. I learned that myself recently, from a very wise orthopaedic surgeon – right here in Las Vegas – at Crovetti Ortho,” Traci says with a smile.