When Tennis Is Your Career, You Think Twice About Hip Replacement

Yet – Adolph Is Now A Member Of The “Why Did I Wait So Long?” Club 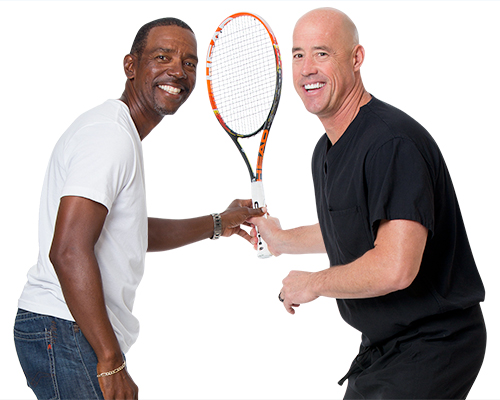 For a lot of people, living with joint pain can be downright miserable. It can cause them to miss out on doing things with their family and friends, eliminate their ability to stay active and healthy, and even take away enjoyment of their favorite hobbies. There’s no doubt about it, when your body isn’t working and feeling as it should – life loses a lot of the “fun” it should include.

But if your livelihood also happens to hinge on your ability to play sports – then the problems caused by an injured or deteriorating joint are compounded. And that is precisely what Adolph Huddleston was facing. “At 52, I was still enjoying my career as a tennis coach and player – which is all I had ever known,” he relates. “And believe me, I knew how lucky I was to have that.”

Being active all his life, Huddleston was used to the occasional sports injury. He knew the drill: You hurt yourself, it heals, and then life goes on. But after one particular ankle injury, he discovered this joint wasn’t going to follow the usual plan.

“I was expecting my ankle to heal and feel better after a short time, so I continued to ‘power through’ the pain,” states Adolph. “But over 18 months later, the pain hadn’t gone away. In fact, to compensate for it and to be able to keep coaching, I was unknowingly shifting the position of my pelvis – which then put pressure on my hip joint. That created an abrasion that started wearing out the ball in my hip, and the domino effect just sort of kept going from there.”

As it turned out, one of Adolph’s tennis students was Dr. Michael Crovetti’s daughter. (Talk about being in the right place at the right time!) After consulting with Dr. Crovetti about his pain – and discovering how his condition was deteriorating – they discussed what his options were. It didn’t really come as a surprise to Adolph that it was just a matter of time before he needed to have his hip replaced. The problem was, he was trapped in a Catch-22.

“I realized right away that Dr. Crovetti was right. The pain just continued to get worse, the diagnosis was there, and I trusted his judgment completely. But it also was disarming news, because I was afraid I would ultimately have to change my career to do something other than coach and teach tennis. And because I knew that was a very real possibility – I kept putting off the surgery. It was almost as if I believed it was better to be in excruciating pain and be able to play tennis – than to have the pain gone, but lose my game.”

It wasn’t at all an easy choice for Adolph. That is, until it really wasn’t a matter of “choice” any longer.

“I continued on the same course for about a year after Dr. Crovetti’s diagnosis,” Adolph continued. “But every day things got a little bit worse. Getting in and out of a chair was painful. Bending over was out of the question. It took several minutes for me to get out of my car. I began walking with a limp, and let’s just say that being able to run was a vague memory. Finally, when I could no longer sleep and was in pain literally every moment of the day, I realized it was time. Tennis or no, I knew this was no way to live.”

The last straw was when Adolph wasn’t even able to sit through a movie with his wife, Stacy. The next day, he called Dr. Crovetti, they scheduled his surgery, and Adolph hasn’t looked back since.

“I’d never had surgery in my life before, so I was really nervous about it,” Huddleston states. “But Dr. Crovetti helped put me at ease. He was very straightforward in answering my questions and any anxiety I had about being able to function and do the work that I loved was completely put to rest. In fact, I was looking forward to re-discovering life without pain! Knowing his vast experience in this type of surgery, too – well, I guess some of his confidence rubbed off on me. I’m glad it did. Because like so many other patients of his, the only question I ask myself now is: ‘Why did I wait so long?'”

Adolph’s surgery took place 3 years ago, and according to him: “It was effortless. For me, anyway. I went in, the surgery was done. I recovered in the surgical suites – which was like paradise, they took such great care of me. I really loved it – in fact, I didn’t want to leave,” he laughs. “I was getting used to all the attention!”

“Afterwards, I had a quick initial recovery. In my case, I needed to continue with extensive rehab because to play tennis, I had to be able to use my legs for jumping and pushing off – and it took a lot of work to get to that point. But I strongly believe Dr. Crovetti’s program of getting started immediately after surgery played a big part of my recovery and my ability to get back to work.”

Today, Adolph is back to enjoying his life – every bit of it. His wife and three children are thrilled to see him living without pain and doing the work he loves. And it doesn’t hurt that he can join them in a game of basketball from time to time, too. “I know it sounds like a cliché – but Dr. Crovetti really did give me my life back. In fact, he gave me back my career, too. And in my opinion, it just doesn’t get any better than that.”