“Why Wait to Live Without Pain?” – Why Indeed. 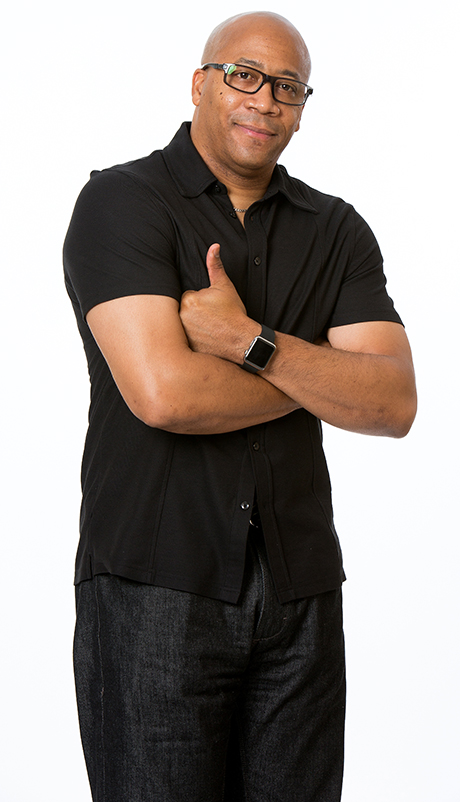 “My entire life has included basketball – in one form or another.” That’s not just an idle remark made by a casual basketball fan. It’s a deep truth for Redell. If he wasn’t playing it in high school and college, he was coaching or playing pick-up with his kids. Oh sure, football and other sports played a big role, too. But basketball . . . that’s where Redell’s real passion has always been.

With serious play, though, often comes serious wear and tear. That was the case for him in college, when he experienced various ACL injuries. As many do, he tried addressing the pain with cortisone shots for a few years, but no one really expected those to “fix” his knee problems. It just made it possible to ignore them, for a while. But when he began feeling that bone-on-bone sensation – and came to realize there was literally nothing he could do without experiencing immense pain (especially while playing basketball) – he knew it was time to start seeking a real solution.

Through his basketball coaching with the school district here in Las Vegas, he started asking his colleagues if they ever had knee or joint problems – and if so, what did they do about them? Redell approached several of his fellow coaches and players about the topic – and for some reason, he kept hearing the same name come up over and over again. “Okay then,” he figured – “maybe this is sign that he should get in touch with this Dr. Michael Crovetti everyone is raving about.”

“To be honest, I wasn’t looking forward to dealing with more doctors,” reveals Redell. “Some of them are very brash and distant – even inhospitable. I’ve had those interactions with other doctors and it always turned out to be a bad experience, all the way around.

“But Dr. Crovetti – he’s not like that at all. He didn’t meet the stereotype of other doctors that I’ve dealt with. He’s very approachable, which I really wasn’t expecting – despite all the great things I had heard about him. Actually, it was more like just talking to a good friend. And when I discovered he also stepped up and did a lot for the community – that was really important to me, because I feel strongly about giving back, too.”

In fact, Redell is not only a volunteer coach with the school district, he’s deeply involved with the Las Vegas community in many areas. Working with both kids and adults to provide services where the need is greatest, his efforts in these and other faith-based organizations have been recognized with multiple community awards.

“But the real reward for me is being able to make a difference,” he explains. “The first kids I started working with weren’t doing so well in school and were always truant. So, getting to be there for their graduation and to know that I was able to help make that happen, even just a little – is really important to me.”

Between his family, his work, and his community volunteering, he had plenty of reasons to decide that being sidelined with a bad knee just wasn’t something he was willing to surrender to.

“To be honest, once I met with Dr. Crovetti I didn’t even need to see anyone else. He was my first and only doctor for this procedure, and he was very open and honest with me from the start. We discussed my condition and I decided to try a couple more of the cortisone shots. But the pain, of course, was still there. So, we agreed it was time to take action that would get rid of that pain once and for all.”

It was in November of 2013 that Redell underwent his knee replacement surgery with Dr. Crovetti, and since that day, he’s never looked back.

“The entire experience was far beyond anything I had expected,” continues Redell. “The surgery was a breeze – and the surgical recovery suites were the best thing ever! It’s like being in an apartment – your very own special room that has an awesome staff to take care of you around the clock. I was up just hours after my surgery, and the nurses and physical therapist kept me moving so I could start recovering right away.

“It actually took about 6-8 months before I was completely back to normal, and that was with a lot of physical therapy and plenty of help from my family. That last part was the most important to me, because having a good home base to keep facilitating my recovery just made it happen faster because I was so motivated. Today, I’m 100% back to normal.”

That’s no small thing to Redell and his family, which includes a daughter and a son who thought maybe – with his dad’s bad knee – he’d get the best of him on the court someday.

“No chance! I’m back to playing again with no pain, and my son still can’t hold me – just like before my surgery. But he keeps trying! I’m also back to playing with my friends and I never really stopped coaching. But now, getting to do all this – without pain? It’s the best – and so is Dr. Crovetti.”